Najat has been the head nurse at the Tuberculosis Center in Nazareth Hospital for the last 15 years. Before she joined Nazareth Hospital, she worked as a Deputy Head Nurse in the Bone Marrow Transplantation Unit in Hadassah Hospital in Jerusalem for 10 years.

Najat has been active in a number of charities and civil society organisations and has volunteered with several relief campaigns. She is the Chairman of the Board of Directors at the educational organisation the Forum for Sexuality and was a Board member at Kayan Organization. She has a BA in nursing from the Hebrew University in Jerusalem, MA in Management of Health Systems from Clark University USA, and MA in Gender Studies from Bar Eilan University.  Najat is also a trained personal Coach. 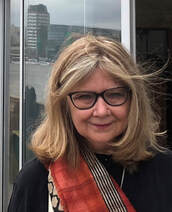 Caroline is Professor of African and Middle Eastern Studies at the University of Kent (UK), and she works mainly on liberation struggles and their expression in the arts and popular culture. Her research programmes include ‘Radical Distrust’ (ESRC), ‘Imagining the Common Ground’ (AHRC) and ‘Egypt’s Living Heritage’ (AHRC Newton), with projects on trust-building in Beirut, the predicaments of Palestinian prisoners, the Arab uprisings and community engagement through the arts in Egypt. As an arts activist, she co-produced The Keepers of Infinite Space, a play on Palestinian prisoners (Park Theatre, 2014); co-directed, with Rita Sakr, the film White Flags(2014); and co-directed, with William Parry, the film Breaking the Generations: Palestinian Prisoners and Medical Rights. (2015) Her latest book is Creative Radicalism in the Middle East: Culture and the Arab Left After the Uprisings (I.B. Tauris, 2020) and she is currently the Co-I on Raphaël Lefèvre’s research programme ‘The Crime-Terror Nexus from Below: Criminal and Extremist Practices, Networks and Narratives in Deprived Neighbourhoods of Tripoli’ (ESRC).

Kanwal is a Phd researcher at the University of Exeter, and a member of the Gulf Studies department and the European Centre for Palestine Studies. She works on modern histories of the Gulf. Her interests include critical histories, gender studies, education, bringing academia beyond the university, and social justice.

Blanka is a teaches at a primary school in Oxford, UK. She is a lawyer by academic training and worked at the London based international organisation Global Witness before she moved to work in the education sector.

Dr Haddad is the Acting Director of the Kenyon Institute, the Jerusalem branch of the Council for British Research in the Levant. He is a social scientist whose work focuses on the political economy of development and conflict in the Middle East, and Israel-Palestine in particular. Toufic has an eclectic professional and academic career working as a journalist, editor, publisher, researcher, and consultant. He holds a BA in Philosophy and Middle East Studies from Trinity College [CT, USA]; an MA from New York University (Near East Studies and Journalism); and a PhD from the School of Oriental and African Studies (SOAS), University of London (Development Studies). Toufic has also lectured at SOAS, King’s College London,and Birzeit University.